When words can be a medicine for pain 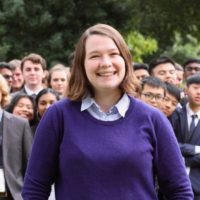 Paige Burton is a campaign messaging and strategy consultant. She was the 2017 Australian Youth Representative to the United Nations. She is a twice recipient of the 'Impact 25: The 25 Most Influential People in the Social Sector’ award.

In 2017, as the Australian Youth Representative to the UN, I conducted the largest ever face-to-face consultation of Australian young people. The consultation gathered stories and data about issues of importance to people under 25 living across all of our Federal Electorates. Healthcare was consistently listed as an area of major concern and priority. It was the most significant issue for young people living in 20 Australian electorates and was the fifth most important issue for young Australians overall. When we think of ‘youth issues’, healthcare doesn’t immediately come to mind. When we read articles about changes to health funding, they often feature discussion of our ageing population, occasionally they profile facilities for newborns. Rarely do we as a society discuss young peoples’ health in a complex way.

With recent efforts to mainstream discussion of mental health aside, the dominant public narrative about issues impacting young people tend to exclude mentions of the healthcare system beyond concerns about drug and alcohol use. It is a seductive lie that tells us health issues experienced by young people are the result of risky social behaviour. Whilst substance use and mental ill health are common and significant problems for young Australians, young people, especially those experiencing chronic pain, and those who are chronically ill are often disaffected by the system. Research has consistently demonstrated the benefits of health policy that results from a deliberate collaboration with people affected by its implementation. So why are young people still being left behind?

The causes of this disengagement are numerous, and the path to fix productive youth engagement with the health system will be long and difficult. This article focuses on perceptions of trust, the failure of language, and the dispassionate nature of care.

“To be a master of metaphor,” Aristotle wrote in his Poetics, “is the greatest thing by far. It is the one thing that cannot be learnt from others, and it is also a sign of genius.” And yet, a genius by this standard is still unable to bridge the gap that almost 1 in 5 Australians face in being able to properly articulate their ongoing pain to healthcare professionals. As Elaine Scarry wrote in her treatise The Body in Pain “to have great pain is to have certainty; to hear that another person has pain is to have doubt.” “English,” writes Virginia Woolf, “which can express the thoughts of Hamlet and the tragedy of Lear has no words for the shiver or the headache.”

When language fails, kindness is the most valuable resource at the disposal of healthcare workers.

Communicating the nature of one’s illness is in and of itself a difficult task, but when you consider that just 35% of young people feel that they are taken seriously by adults and people in positions of authority, that task can feel prohibitively daunting, next to impossible. When language fails, kindness is the most valuable resource at the disposal of healthcare workers. During the 2017 Youth Representative consultation, thousands of young people shared stories of their experiences with our health system— many struggling to pay for specialists, or be taken seriously. But many demonstrated the life-changing nature of compassionate practitioners.

This story from a young woman in Tasmania articulates the importance of kindness in medicine:

“I was admitted to hospital again, the pain I was feeling blamed on my anxiety. No one asked me what I was like before this pain, no one told me it was going to be okay. No one believed me. One night while I was crying in an emergency bed a nurse came over to hold my hand and he asked me what was wrong. I told him that I felt ridiculous coming in and that I had wasted everyone’s time and that next time I might just stay at home. He firmly told me that my pain was real and that I was not a bother. That act of empathy changed my life”.

So too this story from a young man in New South Wales:

“…after years of seeing doctor after doctor about my pain, I finally found someone who believed me. As I was leaving, she took my hand and said “this is not how you’re supposed to feel all the time, we’re going to work together to find a way to make your life easier” and I just broke down in tears, relieved to finally feel understood.”

When someone is stuck in the language-destroying isolation of pain and illness, compassion is the only way to shrink the space between patient and practitioner. When everything feels difficult and painful, being believed and small acts of kindness are life-altering.

Young people need to be able to picture themselves in a health environment that makes them feel included, respected, and supported.

For our system to more effectively engage young Australians, we need a concerted effort to include them. We must develop broader and more inclusive narratives about our healthcare system. Young people need to be able to picture themselves in a health environment that makes them feel included, respected, and supported. Those narratives must arise from truth – they must come from a healthcare system that young people can financially afford to engage with, and one that treats them with respect. We need to recognise that the funding of our healthcare system, and the training of medical practitioners aren’t just important to young people because they will need to engage with it in the future, but these issues affect young people now, in a myriad of ways.

Photo by Bruce Hong on Unsplash

Vision of youth for a healthier future

The value of a lived experience workforce