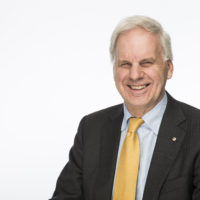 Professor Anthony L. Cunningham AO FAHMS, is President of the Association of Australian Medical Research Institutes and is the Executive Director of the Westmead Institute for Medical Research and the Institute’s Centre for Virus Research. An infectious diseases physician, clinical virologist and scientist, Tony is internationally recognised for his research on the immunobiology of HIV and herpesviruses, his work on vaccine development and trialling, and as an antivirals expert.

Medical research has done a remarkable job in improving our health, allowing us to live longer and healthier lives. Penicillin has stopped many routine infections leading to mortality. Anti-cancer drugs have meant different cancers and leukemias are now treatable. Vaccine development has meant measles, whooping cough and congenital rubella are no longer prevalent. Diabetes and HIV can now be managed with effective treatments. The prevention and management of cardiovascular disease is much improved.

Our achievements in Australian medical research have been substantial too. We can be proud of Australia’s role in the development of the cochlear implant, organ and stem cell transplantation, discovering the bacterial cause of stomach ulcers, the development of a vaccine to prevent cervical cancer, and the anti-leukemia drug, venetoclax. Despite our small population, Australian medical research is world-class, making a difference to lives around the globe.

Despite our successes, the health benefits we get from research should be even greater. Until recently, and with many great exceptions, we have not made enough effort to integrate our research within the health care systems and respond to the needs of consumers. This is important because increased engagement speeds up the process of turning discoveries into new treatments. Conversely, reduced levels of collaboration can result in slower or incorrect diagnostics, less effective treatments being pursued, and disease areas not receiving adequate research attention.

I’m not suggesting there aren’t many great examples of collaboration taking place. There are thousands of clinical trials across the country doing this. There are many strong and productive research collaborations between medical research institutes, universities and hospitals. But I believe there is potential for much more, to the extent that research is routinely integrated into every aspect of healthcare delivery.

The benefits of researcher-consumer collaborations are substantial. Some of the most effective collaborations can be seen in my own field of HIV research. When the HIV virus was first discovered as the cause of AIDS in 1981 there was limited understanding in how the virus worked and what treatment options would prove most effective. The absence of effective treatment quickly led to mortality amongst those with the infection.

Stopping the spread of HIV, and reducing the stigma associated with the disease, has required close work between researchers and consumers.

Finding effective treatments required a rapid response that brought together researchers, pharmaceutical companies, clinicians, patients, as well as the broader community. Effective feedback loops were established allowing researchers to more quickly see the impact of new drug treatment options. This allowed drugs to be further refined and has allowed clinicians to develop more tailored treatment options. Patients were heavily involved in this, with thousands participating in clinical trials, reporting on the effectiveness of new drugs and their side effects.

It’s not just drug development where this collaboration has yielded advances. Stopping the spread of HIV, and reducing the stigma associated with the disease, has required close work between researchers and consumers. By gaining a greater understanding of the communities more likely to be affected by HIV, targeted and highly effective public health campaigns have been developed. Consumers have served in advisory committees to government, research centres and granting bodies and as advocates in collaborative approach to HIV control – and were partly responsible for its success, as recognised by the World Health Organisation.

Other global health emergencies, such as the emergence of the Ebola and Zika viruses, and avian flu, have also seen rapid collaboration between researchers and consumers. While these responses have been effective and show the best of medical research working alongside healthcare professionals, such collaboration needs to be routine in all aspects of healthcare, not just when we are faced with a crisis. Despite the many other examples of great collaboration, we can do better at translating more of our great research into improved health outcomes.

There are many reasons why our research and health systems have not been as well integrated as they should be. Chief among them has been funding pressures within the health system leading to research falling down the list of competing priorities. Not only has this inhibited the translation of research into new healthcare practice, but it has also had the consequence of pushing researchers further away from patients.

Our research system has also inhibited the kind of collaborations that we need to see between researchers and consumers. Most government funding for researchers has been for investigator initiated and led projects. These are important projects, driven by the curiosity and brilliant minds of those working in medical research, and are at the heart of breakthroughs worldwide. It’s where the big bang moments in medical research take place. Unlike many other leading research nations, Australia has not had a funding mechanism that responds directly to the research needs of consumers and focuses on turning these incredible discoveries into improved health outcomes.

Excitingly, change is underway to address this gap. A $20 billion Medical Research Future Fund (MRFF) has been established to complement our investigator-led National Health and Medical Research Council funded research. The fund is already well under way, with over $6.9 billion paid into the fund. By the time it is fully up and running it will fund an additional $1 billion per year in medical research, effectively doubling the Australian Government’s investment in medical research.

We have an unrivalled opportunity to join up and truly integrate our world class research and healthcare systems.

Already the MRFF is having an impact on how we do health research. It has funded Australian Health Research Translation Centres, bringing together researchers, practitioners and patients to accelerate the translation of research into new treatments. We have seen clinician researcher fellowship schemes expanded, allowing clinicians to integrate research into clinical practice. But this is just the start. In the coming months we should see many more new schemes funded.

Inevitably there is much excitement in the research community, but there should be excitement and engagement across the whole community. We have an unrivalled opportunity to join up and truly integrate our world class research and healthcare systems. If we succeed in doing this, we can accelerate our ability to tackle diseases in new and more effective ways, and we will be able live healthier and happier lives.

Photo by Hal Gatewood on Unsplash

Consumer Involvement in Health and Medical Research: What’s driving change and how can health consumers contribute?

Thanks for the funding, but is that all there is?