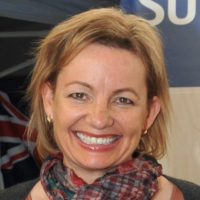 Sussan Ley is Federal Minister for Health and Aged Care and Minister for Sport. Before entering Parliament in 2001 as MP for Farrer, Ms Ley held a variety of occupations including as an air traffic controller, commercial pilot and as an Australian Taxation Office employee. She was appointed to a range of parliamentary secretary positions up until 2007. In Opposition she held several shadow portfolios including Housing, Status of Women and Assistant Treasurer. On returning to Government in 2013, Ms Ley was appointed Assistant Minister for Education until her appointment as Health Minister in December 2014.

I had the honour of taking up the Health Ministry nearly two years ago….