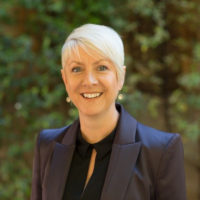 Lorraine Chiroiu BA (PR), PDM (Mktg), GAICD, MBA is Deputy Chief Executive Officer, AusBiotech Ltd. Since joining AusBiotech more than eight years ago, Ms Chiroiu has worked on public policy impacting the life sciences sector at state and Federal levels, including economic development, tax incentives, patent protection and medical research. This work involves the broad biotechnology community and the 3,000 members of AusBiotech whose aim is to translate research into health products and services, and promote the growth of Australian biotechnology. Before joining AusBiotech, she worked in corporate and public affairs roles for a multinational biopharmaceutical company, the Pharmacy Guild of Australia and the University of Melbourne. She currently sits on the Federal Government’s Clinical Trials Advisory Committee and its Communication Working Sub-Group, and is also a member of the Australia Institute of Company Directors.

To hear industry criticised in the healthcare context for having a commercial orientation, appears to misunderstand – or perhaps undervalue – the pivotal and critical role commerce plays in transforming Australia’s world-class research into accessible healthcare.

As in many first world countries, in Australia the development of technologies like medical devices is a public-private compact – needing both parts to make it work.

Typically, biomedical research, publicly-funded in universities or medical research institutes, (MRI) should it show promise, enters a translation process that relies on the attraction of private money to translate it into a product, therapy, cure, vaccine, diagnostic or prosthesis.

Given no Australian government has ever brought or fully-funded a biomedical product to market, the process begins by “spinning out” the intellectual property resulting from the research into a start-up company. In this context, the company is a legal entity owned by the university, the MRI or the researcher. The company can then attract the hundreds of millions of dollars required over the 10+ years of the clinical trials and development that is takes for the product or technology to reach consumers. The public-private compact is activated.

The stark reality is that if not for the commercial orientation, the research would most likely remain a journal article or an award, but it would not reach consumers, or be any use in a pragmatic sense.

Australia often laments its world ranking in innovation outcomes. Essentially Australia is world-leading on the research component, but poor on the translation component. This is perhaps less true for biotechnologies than for the entire innovation spectrum, but nonetheless could be improved.

The core of AusBiotech’s membership is Australian biotechnology and medical technology companies working to commercialise biomedical research. The Australian biotechnology industry consists of about 900 companies: 400 therapeutics and 500 medical technology companies. In Australia, with a few exceptions, these companies are typically young, small and pre-revenue, competing globally for investment dollars, which will most likely run into hundreds of millions of dollars before regulatory approval is achieved. Regulatory approval – or marketing approval as it is otherwise known – is the gateway to making the technology accessible.

Intellectual property (IP) protection is the fundamental source of value that is used by these companies to attract the substantial, multi-million dollar investment it takes to bring these technologies to the patient. To develop the IP and reach the regulatory or marketing approval that is needed before a consumer can benefit from a product, companies must conduct clinical trials, in often up to three phases.

The process of approval is underpinned by evidence that is collected via clinical trials (CTs). In addition to this core role of paving the way to market for new technologies, CTs play an important role in Australia’s economy, healthcare and social fabric by providing early access to unapproved treatments, generating valuable economic activity and creating high-level Australian jobs in science and research. No matter how you view the value, CTs contribute to improved healthcare outcomes.

If research and development is paid for by the Australian people, such as the approximately $1 billion invested in research by the NHMRC each year, I would hope that Australia would be a high priority for commercialisation of the resultant technology, so that Australians can benefit from the outcome. All too often, the global nature of biotechnologies, coupled with the low comparative availability of venture capital and policy settings like high tax rates in Australia, sees our country lose the benefits to other parts of the world; when our innovation is commercialised elsewhere.

Investors and venture capitalists play an integral and critical role in providing the means to commercialisation, but that doesn’t paint the entire picture. It is also multinational pharmaceutical and medical technology companies that have an essential role in the biotechnology development ecosystem

Many are unaware that these companies play a valuable role in the ecosystem in two key ways: by providing expertise and investing resources to develop locally-discovered technologies, via licensing and partnering arrangements; and by investing in local clinical trials, which bolsters Australia’s clinical trial community and capability and gives Australian patients early access to medicines in development, as well as local jobs.

The real impact of the resistance to the commercial nature of the translation process it to make it harder for biotechnology companies to develop and deliver new products to patients in Australia, and further challenges the sustainability and growth of the emerging Australian biotech industry and its CT programs. In short, it impacts and reduces the support that is needed.

For these reasons, retaining and growing public policy settings that support translation are paramount. The Federal Government’s commitment to $20 billion Medical Research Future Fund and the decision to dedicate $250 million in the first two years to the Biomedical Translation Fund as part of the National Innovation and Science Agenda, are not only welcome, but pivotal. So too is the retention of the Research and Development Tax Incentive – a game-changing program for this sector – and recognition of medical technologies and (bio)pharmaceuticals as one of Australia’s areas of strengths.

Industry is as much a part of the accessible healthcare landscape in Australia as the world-class research, conducted in our public institutions – for which Australia quite rightly takes enormous pride.

Ethics and advanced medical devices: Do we need a new approach?